The new password will be activated when you use the activation link in the email. 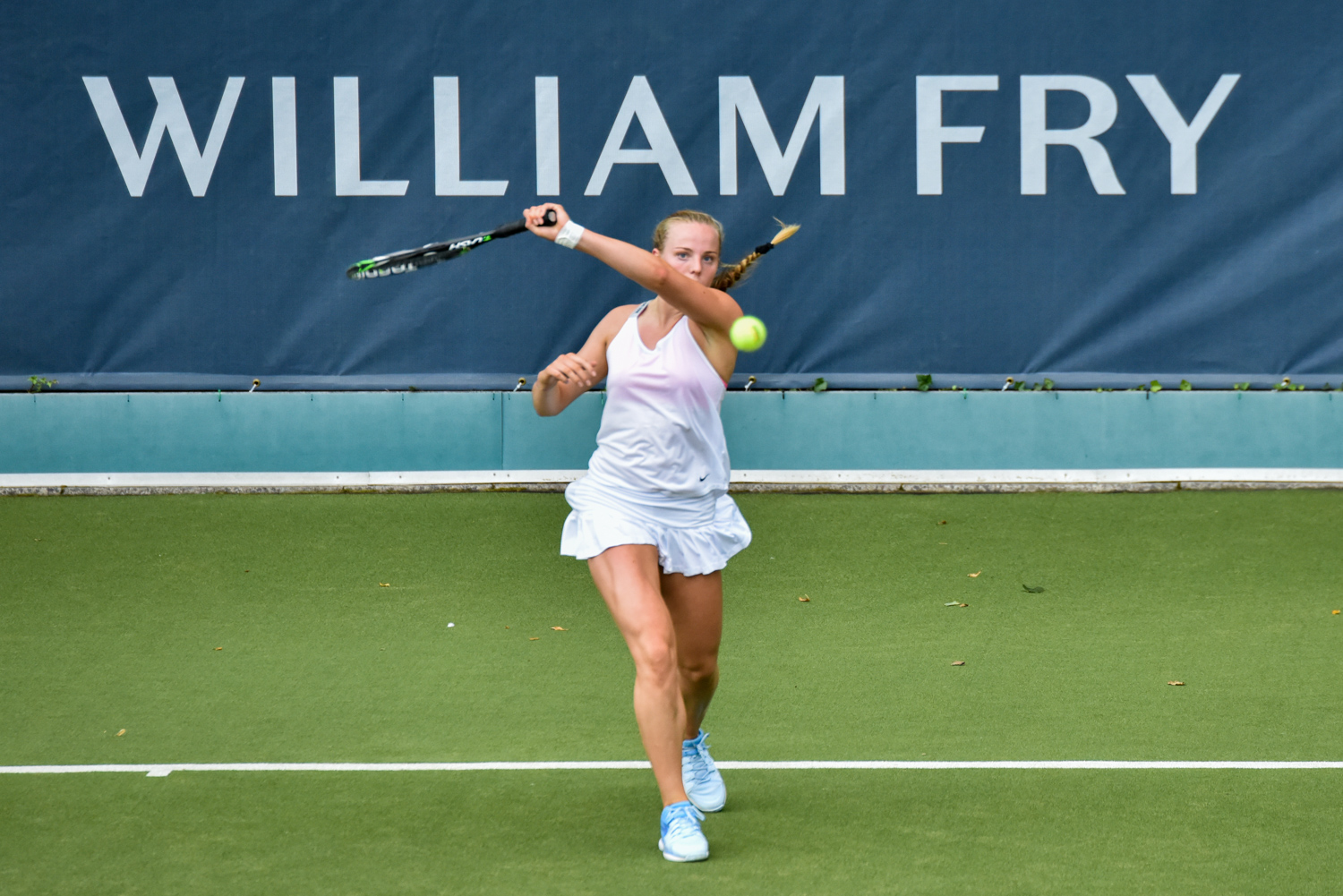 Fitzwilliam Lawn Tennis Club, or Fitz, has been holding tournaments for over 100 years. The Junior Irish Open, aka the Junior Fitz, which has never left the club, has been a rite-of-passage competition for Ireland's top young tennis players since 1914.

The names of the competitors and winners stretch into the past like footprints into history- JD Hackett, Cecil Pedlow, Geraldine Barniville, Tony O'Reilly, John Horne, and the Nilands, Gina and Conor-many of whom played in a time of strict amateurism.
In the early days the country's best junior tennis player could also become an interna­tional rugby player and, between sets, play cricket for Ireland.
Among the gentlemen and ladies of leisure was Pedlow, the under-18 Fitzwilliam champion in 1952. He was capped 30 times for Ireland in rugby and played with the Li­ons on the 1955 tour to South Africa.
Other winners of the junior competition went to take high-profile jobs in public ser­vice. The 1979 headline in this newspaper accompanying Vera McWeeney's report for that year's girl's championships reads: 'Miss Ruane makes it a first for Connacht'.
Catriona Ruane, who also won the 1979 junior doubles and mixed doubles, went on to become an MLA and minister for education in the first Northern Ireland Executive.
Conor Niland, who won it in 1999 and went on to play in the Davis Cup for Ireland and make it into the main draw for senior Wimbledon and the US Open, remembers Junior Fitz clearly .
'Stephen Nugent,' Niland says. 'Yeah, in 1998 Stephen beat me in the final. I was set point and up 5-2 in the first. lean remember it. I won it the next year, though. There's a really special feel about the tournament. If you win it, it doesn't matter
what you did that year, because everyone sees you as the best player in your age group.It's also about Fitzwilliam, the club, the history of it, the all-whites rule ... It's almost like a mini Wimbledon. I'm coaching now, and kids are playing in it, and
I'm around and it feels no less important now than then.'

Three in a row

Four women have won the under-18 event three times in a row; no male player ever did. Eleanor O'Neill McFadden was champi­on in 1956, 1957 and 1958. Heather Flinn, nee Cole, is the oldest surviving champion, from 1947, 1948 and 1949. Mary O'Sullivan, nee Bryan, was the 1954 junior champion and was selected twice to play at the Wimbledon junior tour­nament. She was also one of the top-five bad­minton players in the world.

'It couldn't have been more different in those days. You had one racket and went and played. You didn't have a tennis bag. I kept my racket in a wooden press that I screwed down,' she says. 'Tennis balls were white and usually dirty. If you were top of the pile you might get one tennis racket from Dunlop, which you had to give back at the end of the year.' The former Ireland rugby coach Declan Kidney had a crack at Junior Fitz. So did the Ireland outhalf Johnny Sexton, as did the concert pianist Hugh Tinney.

Once situated on Lad Lane, at the top of Lower Baggot Street, the original Fitz was an old wooden clubhouse with grass courts. It then moved to Appian Way. 'Everything seemed a bit magical when one was growing up,' says Tinney. 'There was a sense of history in Lad Lane, also quite forbidding. Only members could go under the pavilion, and it had the sense you were under scrutiny.' 'Huge crowds, lots of rain,' says Mary O'Sullivan of her Junior Fitz years. 'If you won you got seven and six that you had to spend in a sports shop.' 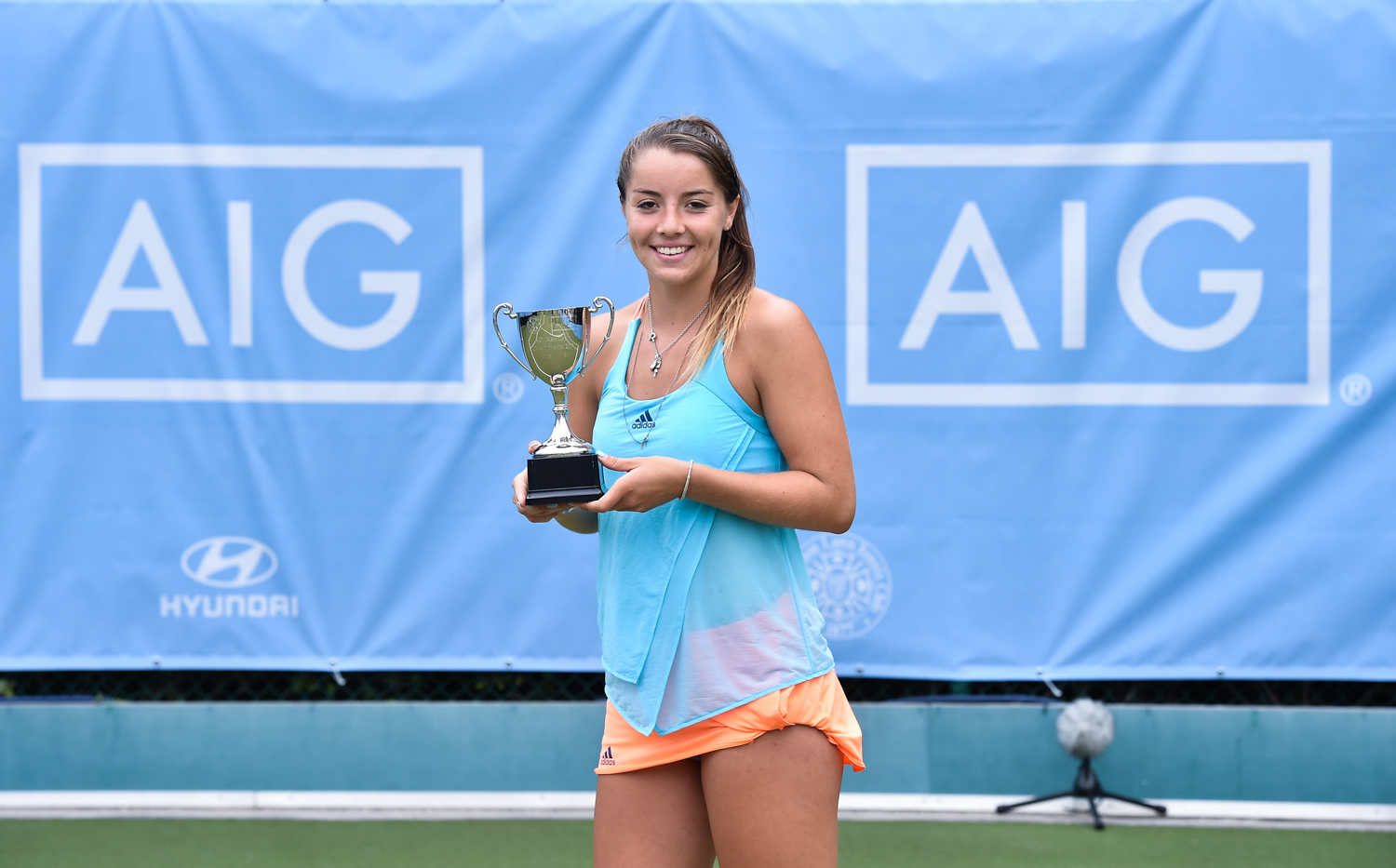 This was the first year of the new AIG Irish Open Tennis Championships, hosted here in Fitzwilliam LTC  between 22nd and 29th Julyr.

There were a mixture of top Irish stars with an excellent entry of international players as well as a number of up-and-coming Irish players, looking to make their mark during the week. The tournament included a is a $25K Futures Men's event on the ITF circuit and a Woman's €15k event - both championships award prize money and world ranking points in the singles and doubles events.

The first Irish Tennis Championship was held in Fitzwilliam Square on Wednesday, 4th June, 1879 and lasted until the following Tuesday. The programme of events, at the time considered liberal, included Gentlemen's and Ladies' Singles, Men's Doubles and Mixed Doubles, otherwise known as 'Doubles for a lady and a gentleman as partners'. In those first championships, fifteen gentlemen competed for a purse of £20, while seven Ladies played for a prize of £10, fourteen men's doubles pairs played for £7 10s each and nine mixed doubles pairs competed for £5 each. The tournament had the distinction of being the first event to feature Ladies' singles, which were only introduced into Wimbledon five years later.

There have been 140 Irish Open Tennis Championships played since then and have only been cancelled as a result of the first world war, the civil war and the second world war respectively (1914-1918, 1922, 1944-1945).
The first twenty five championships were held in Fitzwilliam Square. From 1903 the event was moved to the Fitzwilliam Lawn Tennis Club facilities at Wilton Place.
Cecil Parke, from Clones, holds the most singles titles won by a man, with 8 (1904, 1905, 1908 - 1913). Louisa Martin, from Ireland, with 9 titles, (1889 - 1892, 1896, 1899, 1900, 1902 and 1903) is the most successful woman in the history of the tournament.
Some interesting family pairs in the last few centuries of the championships include numerous brothers and sisters sharing doubles titles; two brother/sister pairs in the Mixed doubles; Mrs and Miss Grimshaw, a mother and daughter pair won the 1909 Ladies Doubles title; the father and daughter pair of Mr. and Miss Lottie Dodd, from England, reached the Mixed doubles final in 1892. The first husband and wife winners were England's George and Blanche Hillyard in 1894, followed fifty seven years later by Irish spouses J.J and Mary Fitzgibbon. 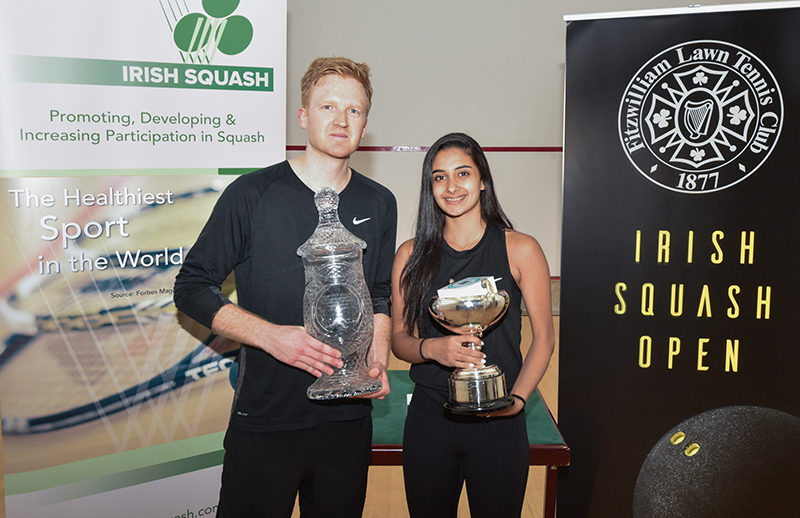 The Irish Squash Open is the highlight of the squash season and calendar in Ireland, attracting the highest calibre of entrants. This year's competition hosted entries from 12 different countries with players holding rankings as high as the top ten in the world and is one of the most popular on the PSA World Tour. This can be attributed to the high standard of squash on show and also to the excellent hospitality and facilities offered by our club, its members and its officials.

The club opens its doors to the public for the week's duration of the tournament and many spectators have received their first impressions and experiences of the game of Squash and intensity of the competition during the Irish Open. Fitzwilliam LTC can justifiably assert a positive role in the continuing reemergence of the sport in the minds of Irish sportspeople and will do everything it can to continue the success of Squash in Ireland.

The Irish Squash Open week begins with two days of qualifying matches, on the Monday and Tuesday, before the tournament starts in earnest on the Wednesday. By the time the quarter finals arrive on the Thursday, many of the favourites and in-form players have established themselves in the minds of the fans and the other players. The semi-finals, played on the Friday, provide a wonderful spectacle for fans. All of the players at this stage fancy themselves to win the tournament and will fight tooth-and-nail for every point on offer.

Matches tend to be close in the semi finals and some of the most exciting and nail-biting matches have taken place on the Friday, when schedules can go out the window, as sweat, effort and momentum take hold of proceedings.

Saturday is the finals day. Tired limbs are put to the ultimate test while superior fitness levels and concentration separates the winners from the runners-up.